The Untethered Soul helps guide people through spirituality to understand the insignificance of emotions, of that inner voice to help guide to the decision of happiness.
Events are constantly swirling around our world, whether we’re in the world or not, and it’s up to us on how we manage the feelings and emotions behind these events. 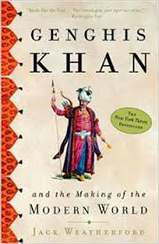 Ghengis Khan and the Making of the Modern World

An interesting “listen” for sure, on a man who drastically influenced our modern world. Ghengis Khan was the founder of the Great Khan/Emperor of the Mongol Empire which was the largest contiguous empire in history. His legacy was initially revelled, but as time passed, this then changed to being characterized as a barbarian. Despite this, some consider him as the best military leader in our history.
He also brought many modern ideas to this past world: